My last day at Intel

The weeks leading up Friday were rough. A lot of tears and sadness and reflection. But now that I have turned in my laptop and cell phone, signed the appropriate paperwork and said my final goodbyes, I'm doing ok. I'm feeling reflective as I remember all the good times and the wonderful places I've visited and the people I've met.

In my first few years at Intel I traveled to Sydney, Singapore, Beijing, Shanghai, Barcelona and probably a few other International destinations I can't remember. I walked on the Great Wall in China, went to a Jade factory and explored the Forbidden City & Tinanmen Square. In Barcelona we enjoyed La Rambla and the Sagrada Familia. As well as the wonderful food and night life.

In Sydney we attended a symphony at the Sydney Opera House and toured Sydney Harbor and The Rocks area. I was in Singapore on Mother's Day one year and was feeling down. My colleague (thank you Kevin) took me out for Chili Crab and I think we also enjoyed high tea at the Four Seasons!

I've also been to the Master's Golf Tournament in Augusta twice, attended the AT&T Pro Am too many times to remember and seen many local performances & events.

I've been a SF Giants fan my entire life and I almost lost my mind when I had the privilege of played a full round of golf with Barry Bonds a few years ago! He was a perfect gentleman and it was a day I will never forget. All of these events and activities were focused on customer events and training and educating the world about Intel based technology. 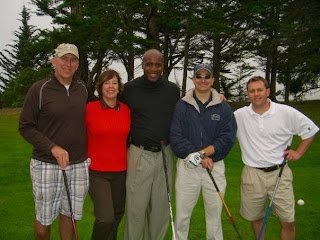 These are things I do not take for granted. They were gifts -- traveling internationally isn't always fun but with my colleagues and managers we always made the most of it.

I've met and worked with, and for the best & brightest. I learned from them and have been challenged to work harder and smarter. My leadership team and friends have taught me to never give up, and to always leave a legacy and help others.

That's what I'm doing. I'm fighting for a cure, educating everyone I come in contact with and doing my best to raise money for research.

Thank you Intel for helping me grow, for pushing me, guiding me and giving me 17 wonderful years. There was no such thing as an 8 hour day--it was more like 10 hours minimum but I can honestly say I loved it! I will miss all of you and hope our paths cross again.

God bless you and thank you💜

I don't know why the news shocked me, and honestly saddened me to the point of tears, and sleepless nights. I don't want to retire, I love Intel, I loved working there, I love telling people I'm on medical leave, and how wonderful and supportive everyone has been. That won't be the case any more. I will be retiring at the end of the month. It's been an amazing and wonderful journey filled with so many memories! I don't even know where to begin other than at the beginning.

I took an early retirement from NCR in 2000. They offered a nice package and the economy was doing well. All the new technology and dotcom startups were offering positions that were of interest to me.  I had a great plan to make millions of dollars and retire early😑  While at NCR I was working with Intel, they were my customer and NCR was their vendor.  Intel is rough on their vendors, they are demanding and difficult to work with. When I told all my Intel buddies in the FAB's that I was retiring, one of the managers suggested I come to work at Intel. I remember telling him 'I would NEVER work at Intel'. My reason for that was because the folks I worked with in purchasing were so rough on us and it was such a stressful environment. But a few weeks later after an interview with Dave Miller in Santa Clara California, I was hired. I remember crying the entire drive to the office. I was so scared, the people there (in my mind) were so mean, and much much smarter than I was. Little did I know that 17 years later I would be in tears again, this time devastated at the idea of leaving the company I love so dearly.

I've had the pleasure of working with many kind, loving, funny, intelligent and driven individuals. We all had one goal -- to make Intel a Great Place To Work and to drive revenue and increase market share, and to be the best technology company in the world.  We worked hard and we played hard! I have no regrets other than I wish I still had the mental capacity to continue working.

I traveled frequently, met with many customers and partners, helped drive business for the healthcare division in the West, grew & shaped the Online Sales Center in Oregon and worked for some of the best people I've ever known. I won't mention them specifically but you know who you are. I love each and every one of you! I learned from each of you, and you taught me how to work smarter, not harder. You taught me to fight for what I wanted, and to to dream big! To explore activities where I could use my skills as a coach and mentor. You pushed me to be better. Because of all of you, and all my friends, employees, staff and colleagues, I am sad to say goodbye.

I was honored to serve as Vice Chair of the Women at Intel organization and to see the growth and support for advancement for women increase over the years. The events we held and the support and coaching provided to women has made a very strong impact across the company. Congrats to all of you! Keep pushing for what you want. 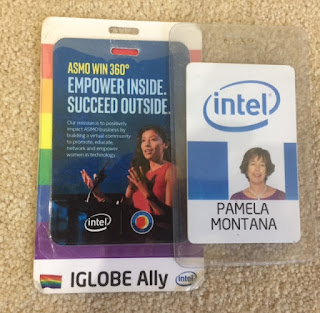 It will be hard to drive to Santa Clara at the end of the month and drop off my cell phone and computer. I've never had another computer other than the ones that Intel gave me. Since I'm not good at learning new things I have already ordered the EXACT same laptop that I've been using for several years. I will get a new phone but I honestly don't remember ever having to pay for a cell phone! It's not a problem at all, it's just another change. Change is not good for me and it scares me now, and I think that's why this transition has been a little difficult.

There is no doubt in my mind that when I walk away from RNB (Robert Noyce Building) I will be a mess. My badge will be deactivated and I will not be able to enter again without someone signing me in. It's all part of the process of facing my Alzheimer's, and my inability to work, but this is probably the biggest issue I have had to deal with since my diagnosis.

I hope to see my friends when they are in town, and thank goodness for Facebook and other social media. It allows me to feel connected. I am thankful for the support I feel from all of you and for your comments and texts. Please stay in touch.

Thank you Intel, thank you all for your coaching, guidance and support over the years💜

I'm excited to be sharing my speech from the Alzheimer's Association 'Part the Cloud' event. I've mentioned many of my symptoms before in my blog but this talk gives a good overview of what I was dealing with at work, how I was covering it up, and how I spend my time now. It also highlights the importance of early detection and knowing the 10 warning signs.

For those of you who don't know my husband, it's also very clear how fortunate I am to have such an amazing man by my side!  His love is VERY apparent in his opening comments and introduction.

And lastly to my Intel friends --- my work there and the coaching, support, encouragement and education have shaped me more than I ever realized or acknowledged! 17 years was a long time and I am so thankful and proud to have had the honor to work there and learn from the best and brightest :)

What a wild ride its been the past few weeks!  Time seems to be flying by and every day brings challenges and victories. 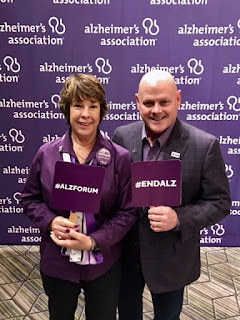 We had a wonderful experience in Washington DC at the 2017 Advocacy Forum. It was the first time we attended and were overwhelmed with the support and kindness of everyone we met. The data and the statistics given were overwhelming and sobering. I think I knew most of them but do you realize every 66 seconds someone in America develops Alzheimer's? Or that there are over 5.5M Americans living with Alzheimer's today? And over 200,000 of them are under the age of 65! Staggering statistics considering the cost of care. We spent several days getting training and education and then went to Capital Hill to share our stories and ask for support for funding and research. 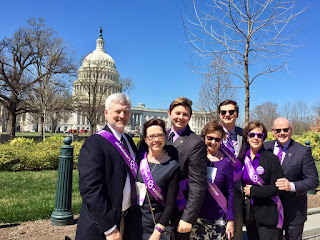 They had special breakout sessions for those with Alzheimer's and I was able to meet several people who, like me, are very vocal and able to care for themselves with minimal support. It was encouraging to hear their stories and to learn from them how they deal with daily life and memory issues. Several of them are on the National Early Stage Advisory Group. I applied a few months ago to be part of this group and hope to be interviewed later this month.  It's a one year role focusing on raising awareness about early stage issues, informing the public about all the wonderful things the Alzheimer's Association does, advocating and speaking to the media, and providing input to external groups regarding early stage issues.  Wish me luck😊 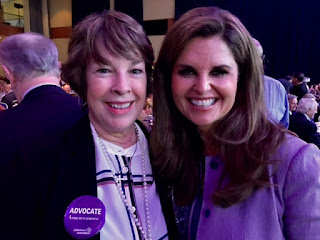 Bob and I also were asked to support Maria Shriver as she testified before the Senate Special Committee on Aging. Originally she wanted to use pictures of my brain that showed the Amyloid and Tau protein build up, but it was too difficult to get a medical release in time. She did mention me in her testimony and Bob and I also joined her and her staff at an event at the Equinox Sports Club in DC kicking off the Move For Minds event.  Move For Minds is a one day, eight city event on June 4th.  Check it out and register! You will learn how to keep your brain healthy, have an amazing breakfast and have a fabulous workout!!

The combination of being surround by 1300 people from around the United States with a passion to find a cure, and connecting with Maria Shriver again was overwhelming!  I had to take a few breaks and spent some time in our room to rest.  At Intel, events like this were common place and fun, now they are overwhelming and exhausting for me.

There are many days I feel almost normal, but when I travel and get in uncomfortable or stressful situations I can tell that my coping mechanisms are different now.  I used to be invigorated by people and events, now they are exhausting and I can only take small doses at a time.  I'm learning more and more each week how to deal with my 'new normal'.  But that's OK. I have a wonderful husband and caregiver, amazing children and grandchildren and many many friends who keep me smiling and give me support when I need it!

Thank you all for your continued prayers & support💜