Yesterday Bob and  I were in Long Beach for our 4th Alzheimer's walk. It was a gorgeous morning and we walked to the aquarium along the water. The Queen Mary was magnificent and so was the sunrise. Even though I was not very happy about getting up at 5:30am, the beauty of our surroundings quickly lifted my spirits!

We were walking on a team that was formed by the California State University (CSU) system Chancellors office. Bob had been on the Board of Trustees for many years and was also the Chair of the Board for two years. He knows everyone in the Chancellor's office and I know some folks and many of the CSU Presidents, but not the staff.  The team they formed was 'CSU for Pam Montana'. Wow!!

When we found out they were walking for me and raising money on my behalf I was so honored. The decision to fly down and walk with them took us only a moment. We were so thankful and wanted to show our appreciation by being there in person...as well as by raising money😊 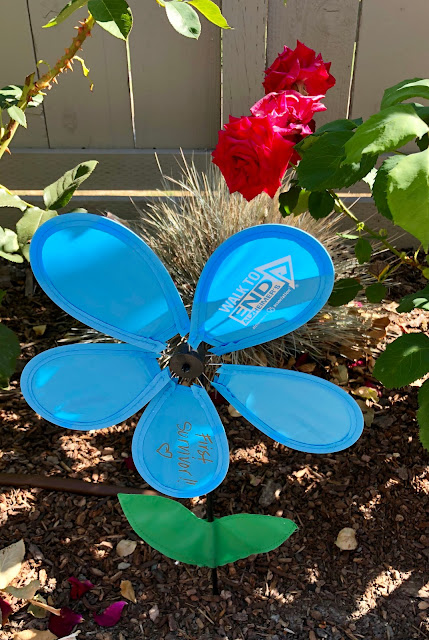 During the event they asked us to pick up our flowers for the 'flower ceremony' portion of the walk. I went up to the table and asked for a blue flower. The woman in charge said that they couldn't give me the flower. The rules required that the person with Alzheimer's had to be present to receive the flower--not a family member. She told me the blue flowers were very popular!! OMG, I was shocked!  I proceeded to tell her that I had Alzheimer's and that I wanted MY flower. And why in the world would anyone 'want' a blue flower?? Are you kidding me?

The problem I see with this woman and many many others in the world is the same. People think Alzheimer's is their grandparents disease. They don't know the facts. The need for awareness and education is very important! There are many who are diagnosed in their 40's and 50's. The definition of  Early Onset means that you were diagnosed before you were 65 years old.

I am grateful to know and to be aware of my diagnosis. And I held my blue flower high for all to see during the ceremony, with tears in my eyes but with hope, and belief that we will find a cure!!!! Let's continue to fight this disease together💜